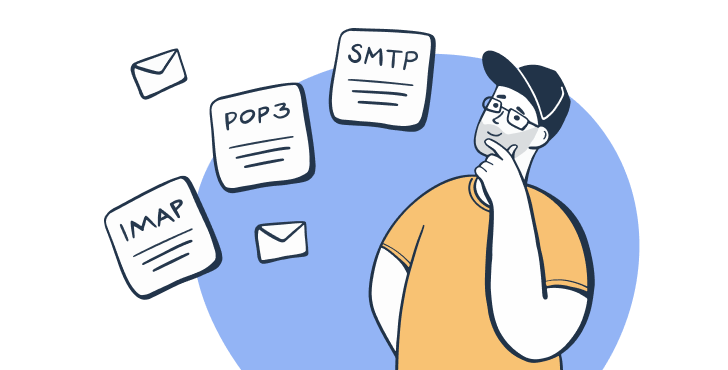 Basically, three parties are involved in transferring an electronic message. These are the sender, recipient, and a mail server. The email goes from the sender to the mail server, which then lets the recipient get the message. What is the role of email protocol here? It establishes connections between transferring parties. So, one protocol is needed to send, and one – to receive. Today, we’ll review the three most commonly used email protocols – SMTP, POP3, IMAP – and help you choose the right option for your purposes.

SMTP – a protocol to send emails

Simple Mail Transfer Protocol (SMTP) establishes how the message gets from the sender to the email server. Also, it is used by a mail transfer agent (MTA) to deliver email between servers – mail relaying. SMTP is meant only to send emails.

SMTP workflow consists of commands sent by the SMTP client and corresponding replies by the SMTP server. Commands are text-based like HELO, MAIL FROM, and others. Also, there can be used extended SMTP (ESMTP) commands like EHLO, STARTTLS, etc. Replies are represented by numeric completion codes like 220, 250, 354, and so on. For more on SMTP commands and response codes, read our dedicated blog post.

Let’s take a look at the interaction between the SMTP client and server through a simple email delivery example:

This is a standard port for SMTP mail relaying – email transition between email servers. Cloud hosting providers and many email clients block the port 25 to combat email spamming. They give precedence to secure connections like 587 or 465.

465 is not an RFC-compliant port. It was meant for the SMTPS encryption and authentication wrapper over SMTP. IANA registered 465 as an SMTP port, but it has never been recognized as an official SMTP transmission or submission channel. Later on, however, port 465 was obsolete and revoked in favor of STARTTLS wrapper over SMTP. Nevertheless, today many servers still use SMTPS and maintain 465.

A default SMTP port 587 is the option to submit an email for routing. TLS encryption ensures the secure submission of the email. Almost all mail servers support 587.

It is not an official SMTP port, but almost any email service provider supports it. 2525 is secured similarly to 587 and is often used in lieu of it. So, if the use of the default SMTP port causes some trouble, try out 2525.

For more on this, read our blogpost about SMTP ports.

Once an email is already at the mail server, either IMAP or POP3 is used to retrieve it from there.

Internet Message Access Protocol (IMAP) is a communication standard to access email stored on the server. Today, its fourth version is in use, so the name of IMAP4 is also widespread. The key feature of this protocol is that the message remains on the server. It will be downloaded as soon as the recipient picks it to open. So, IMAP gets access to the email from any device or location if authorized. This is the go-to option of most email service providers so far.

Here is the basic flow of the IMAP client/server interaction:

Under the hood, a primitive IMAP connection may look as follows:

Here you can find a full selection of client commands.

Darn! We forgot about the IMAP server responses. There are three forms of them:

This response confirms that the server is ready to accept the continuation of the client’s command. It is by a “+” token.

A default IMAP port without encryption

A secured SSL/TLS port used by most email service providers. Also, it is often referred to as IMAPS.

IMAP4 is a sophisticated email protocol. Post Office Protocol is a simpler way to access mailboxes. So far, the version 3 of this standard is widely used – therefore it is POP3. Users love this protocol for its low dependency on Internet connections. POP3 downloads emails from the server to the client, so you can read them even offline. The server deletes messages once they are retrieved. This is the default and common setting, but there is the option to enforce a site policy regarding email retention on the server. At the same time, even if the POP3 client contains configuration options to store mail on the server, the latter in fact won’t support this.

Let’s take a look under the hood of a POP3 session as well.

We used only two commands (DELE and STAT) that are valid in TRANSACTION state. Here you can find more options. As for POP3 responses, they contain a status indicator (+OK or -ERR) and a keyword that may be enhanced with additional information (for example, -ERR no such message, only 2 messages in maildrop).

A default POP3 port without encryption

A secured SSL/TLS port that is often referred to as POP3S.

IMAP or POP3 – which protocol should I choose?

First, we thought on making a table with a comparison of the pros and cons of IMAP vs. POP3. But this idea proved untenable since different users would have different demands as for the email protocol standards. So, we decided to set it up this way instead.

If you’re still undecided about which protocol to choose, we can help. Check out our article on the key differences between IMAP or POP3.

How an email gets from a sender to a recipient

Now, you know what each email protocol is used for. Let’s map a full picture of how an electronic message can get from a sender (bruce@sender.com) to a recipient (jane@recipient.com).

What is a fake SMTP server and why you might need it?

When you need to test whether your app can send emails, the aforementioned journey from sender to recipient can be troublesome. The SMTP server might be configured improperly, or some authentication issues may be revealed, to say nothing about the risk of spamming real users if you’re tweaking an app that is already in production. In this case, a fake or dummy SMTP server is the best option. It’s meant for developers and focused on testing.

For example, if you use Mailtrap, the email delivery flow will look as follows:

That’s a brief overview. You can find more details in this Mailtrap getting started guide. As you can see, the major benefit of a fake SMTP server is that it responds positively to all SMTP commands. So, you do not need to worry about the functionality of your actual mail server.

What is HTTP doing here?

To wrap up our story, we must mention the HyperText Transfer Protocol as an option to access emails. HTTP is not actually for mail transfer. However, it can be used to send and receive messages from email web apps like Gmail. Also, it is a good practice to use HTTP for email access in mobile apps. The protocol has two default ports: a non-encrypted 80 and 443 for secure connections. Except for Gmail, the most common services that use HTTP protocol for accessing emails are Hotmail and Yahoo!