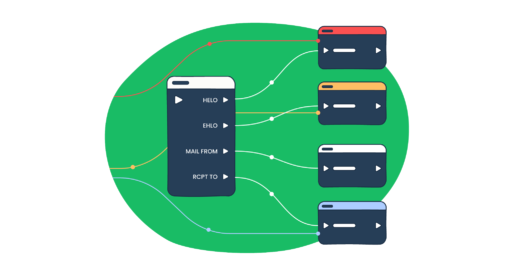 In the blog post SMTP vs. IMAP vs. POP3, we explained that an SMTP session is a sort of a conversation between an SMTP client and an SMTP server. The client talks using commands that consist of alphabetical characters. The server responses with numerical codes. Today, we’ll touch upon this in detail. You’ll find out the valid SMTP commands and the obsolete ones. Also, we’ll shed light on which response codes correspond to each command.

Essential SMTP commands in the order they may be used

Each SMTP command defines a particular function within the SMTP session, which consists of three steps:

Therefore, we decided to list the SMTP commands according to this flow.

The HELO command initiates the SMTP session conversation. The client greets the server and introduces itself. As a rule, HELO is attributed with an argument that specifies the domain name or IP address of the SMTP client.

EHLO is an alternative to HELO for servers that support the SMTP service extensions (ESMTP). If the server does not support ESMTP, it will reply with an error.

In any case, HELO or EHLO is a MUST command for the SMTP client to commence a mail transfer.

The MAIL FROM command initiates a mail transfer. As an argument, MAIL FROM includes a sender mailbox (reverse-path). For some types of reporting messages like non-delivery notifications, the reverse-path may be void. Optional parameters may also be specified.

The RCPT TO command specifies the recipient. As an argument, RCPT TO includes a destination mailbox (forward-path). In case of multiple recipients, RCPT TO will be used to specify each recipient separately.

With the DATA command, the client asks the server for permission to transfer the mail data. The response code 354 grants permission, and the client launches the delivery of the email contents line by line. This includes the date, from header, subject line, to header, attachments, and body text.

A final line containing a period (“.”) terminates the mail data transfer. The server responses to the final line.

The NOOP command is used only to check whether the server can respond. “250 OK” reply in response

VRFY is used to verify whether a mailbox in the argument exists on the local host. The server response includes the user’s mailbox and may include the user’s full name.

EXPN is used to verify whether a mailing list in the argument exists on the local host. The positive response will specify the membership of the recipients.

The hyphen (-) between the numerical code and the user’s mailbox indicates that the response is continued on the next line.

VRFY and EXPN implement SMTP authentication.  Also, they are useful to perform an internal audit of the server. On the other hand, these commands are considered a security risk. Spammers can use them to harvest valid email addresses from the server. Therefore, messaging systems either install corresponding protections or disable the commands.

The RSET command resets the SMTP connection to the initial state. It erases all the buffers and state tables (both sender and recipient). RSET gets only the positive server response – 250. At the same time, the SMTP connection remains open and is ready for a new mail transaction.

The QUIT command send the request to terminate the SMTP session. Once the server responses with 221, the client closes the SMTP connection. This command specifies that the receiver MUST send a “221 OK” reply and then closes the transmission channel.

Extended SMTP commands that some SMTP servers may support

The <a href="https://mailtrap.io/blog/starttls-ssl-tls/">STARTTLS</a> command is used to start a TLS handshake for a secure SMTP session. STARTTLS resets the SMTP protocol to the initial state. Once the response 220 is received from the server, the SMTP client should send HELO or EHLO to launch the session. In the case of a negative response (454), the client must decide whether to continue the SMTP session or not.

The AUTH command is used to authenticate the client to the server. For this, it uses an argument that specifies different levels of security and login methods: PLAIN, LOGIN, and CRAM-MD5. The session is considered authenticated once the server provided a positive response. For more on this, read the SMTP authentication blog post.

The ATRN command replaced the obsolete TURN command. It was used to reverse the connection between the local and external SMTP servers (sender and receiver). TURN lacked authentication and hence was deprecated. ATRN is devoid of this drawback. Besides, it is available for dynamically assigned IP addresses.

The BDAT command is used to submit mail contents. It can be an alternative to the DATA command. BDAT has two arguments. The first one defines the length of the data chunk in octets. The second one indicates that the data chunk is terminating. No need for a period to terminate mail transfer as it is in the DATA command. BDAT is widely used in Microsoft Exchange Server. At the same time, DATA is a must to support command for all servers.

The ETRN command is the request to start SMTP queue processing of a specified server host.

The client and the server may use private-use SMTP commands through a bilateral agreement. These are proprietary service extensions and should start with “X”. They must not be registered or standardized. Here are some of them:

On the web, there are many outdated sources where you can encounter obsolete SMTP commands. Not to waste your time for invalid options, here is a list of the commands you can’t use anymore:

The SMTP server responses to the client using a three-digit code. Each digit has a special significance:

As you may have noticed above, some codes are command-specific. Actually, only three of them, 500, 501, and 421 can be a response to any SMTP command. Others can be categorized as positive and negative (code 354 can be considered as an intermediate response). Let’s see which commands they can refer to.

This is the list of standard response codes. It should be also mentioned that some SMTP servers can generate other three-digit codes. In this case, the SMTP client will have to interpret the first digit that must be in a range from 2 to 5 inclusive. It denotes the essence of the response (successful or not).

Example of an SMTP session

Now, let’s have a look at the example of a typical SMTP session flow. We’ll see two scenarios: a successful and aborted transaction.

In this example, the client received the 550 code that said that one of the recipients is not available. Nevertheless, the transaction was not aborted like in the example below.

Once an email has landed on the sender’s SMTP server, it is still at the beginning of its journey. Before reaching the recipient’s mailbox, the email has to get to the recipient’s SMTP server, which forwards it to IMAP/POP3 server. And each server implements authentication before it lets the email in. To ensure that your emails meet the technical requirements for a quick authentication process, it’s always a good idea to test and debug them in a safe environment like Mailtrap Email Sandbox.

Using Email Sandbox, you can analyze raw data, headers, and other technical information about your emails. Additionally, it helps you inspect and validate HTML/CSS and get quick spam reports that help you understand what needs to be improved.

To learn more about Email Sandbox, check out our Getting Started Guide.