How to Send an Email in Python 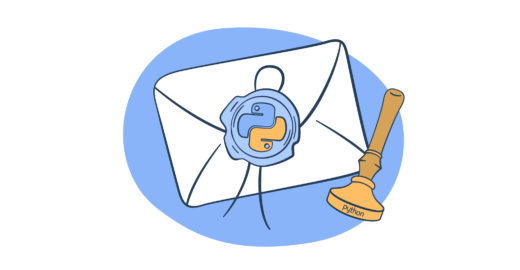 What do you need in order to send an email with Python? Some basic programming and web knowledge along with elementary Python skills. We assume you’ve already had a web app built with this language and now you need to extend its functionality with notifications or other email sending options.

With numerous code examples, in this 2022 tutorial, we’ll guide you through the fundamental steps of sending different types of emails via an SMTP (Simple Mail Transfer Protocol) server using Python.

What email sending options with Python are there?

The two primary ways of sending emails in Python are using an SMTP method and the second one is a transactional email service. Let’s take a closer look at the two and unpack how they work.

Send emails with Python and SMTP

The first good news about Python is that in its standard library there is a built-in smtplib module that is used for sending emails via SMTP connection. The module uses the standard RFC 821 protocol, so no extra installations or tricks are required.

If you decide to set up the sending functionality in your Python app without built-in SMTP, you can integrate third-party transactional email API.

One of the main reasons to go this route is if a strong deliverability rate is a critical factor for you. Most third-party API services have analytical tools and provide scalability opportunities you might need as your project grows.

How to send emails using SMTP

The built-in smtplib module can be imported using the following statement:

To send an email later, create one SMTP object:

An SMTP object has an instance method called sendmail that is used to send a message and has three parameters:

To make sure that the email module has been imported properly and get the full description of its classes and arguments, type in an interactive Python session:

Refer to Python documentation to further review the rest of the SMTP Objects (e.g., smtp.ehlo; smtp.send_message(msg) etc.) and how to apply them.

Below you can find an example of a simple Python script that shows how one can send an email from a local SMTP.

However, this code wouldn’t work.

Firstly, you’ll need an actual working SMTP server. Secondly, most recipients reject emails from untrusted sources. On top of that, getting all the relevant validations and certifications for other servers to approve your emails is not easy.

Using a third-party API for sending functionality in your Python app is the best way to go about it. One like Mailtrap Email Sending, where the tedious work of ensuring your emails get delivered is already done, and there is no need to set up your own SMTP server.

With the help of actionable analytics, our Email API helps devs gain full control over their email deliverability, allowing a sending throughput of roughly 10,000 emails a second.

Before you’re able to send out any type of email with Mailtrap, you’ll need to connect and verify your domain name. Check out our detailed guide and a bonus video instruction on how to do this.

How to send HTML emails in Python?

In most cases, you need to add some formatting, links, or images to your email notifications. We can simply put all of these with the HTML content. For this purpose, Python has an email package.

We will deal with the MIME message type, which can combine HTML/CSS and plain text. In Python, it is handled by the email.mime module.

It is better to write a text version and an HTML version separately and then merge them with the MIMEMultipart("alternative") instance. It means that such a message has two rendering options accordingly. In case an HTML isn’t rendered successfully for some reason, a text version will still be available.

How to send emails with attachments?

The next step in mastering sending emails with Python is attaching files. Attachments are still the MIME objects, but we need to encode them with the base64 module that encodes all binary data into ASCII characters.

A couple of important points about the attachments:

In transactional emails, PDF files are the most frequently used: we usually get receipts, tickets, boarding passes, order confirmations, and many other authentication-related documents. So let’s review how to send a boarding pass as a PDF file.

To attach several files, you can call the message.attach() method several times.

How to send emails to multiple recipients using Python?

Sending multiple emails to different recipients and making them personal is the special thing about emails in Python.

To add several more recipients, you can just type their addresses separated by a comma and add CC and BCC. But if you work with bulk email sending, Python will save you with loops.

One of the options is to create a database in a .csv format (we assume it is saved to the same folder as your Python script).

We often see our names in transactional or even promotional examples. Here is how we can make it with Python.

Let’s organize the list in a simple table with just two columns: name and email address. It should look like the following example:

The code below will open the file and loop over its rows line by line, replacing the {name} with the value from the “name” column.

After running the script, we get the following response:

In our Mailtrap inbox, we see two messages: one for John Johnson and another for Peter Peterson, delivered simultaneously:

How to send emails with images?

Images, even if they are a part of the email message body, are still attachments as well. There are three types of them:

We have described their peculiarities, pros and cons, and compatibility with most email clients in this post.

To add a CID attachment, we will create a MIME multipart message with MIMEImage component:

The CID image is shown as part of the HTML message and as an attachment. Messages with this image type are often considered spam: check the Analytics tab in Mailtrap to see the spam rate and recommendations for improvement. In most cases, many email clients  – Gmail in particular – don’t display CID images. So let’s review how to embed a base64 encoded image.

Here we will use base64 module and experiment with the same image file:

Now the image is embedded into the HTML message and is not available as an attached file. Python has encoded our jpg image, and if we go to the HTML Source tab, we will see the long image data string in the img src.

Sending emails with Python via Gmail

You can configure your production server when ready to send your custom emails to a real recipient’s email address. It also depends on your needs, goals, and preferences: your local host or any external SMTP.

One of the most popular options is Gmail so let’s take a closer look at it.

We often see titles like “How to set up a Gmail account for development”. It means you will create a new Google account and use it for a particular purpose.

To be able to send emails via your Gmail account, you need to provide access to it for your application. You can Allow less secure apps or take advantage of the OAuth2 authorization protocol. It’s way more difficult but recommended due to security reasons.

Further, to use Gmail’s SMTP server, you need to know:

If you tend to simplicity, then you can use Yagmail, the dedicated Gmail/SMTP. It makes email sending really easy. Just compare the above examples with these several lines of code:

When creating a new app or adding any functionality, especially when doing it for the first time, it’s essential to experiment on a test server. Here is a brief list of reasons:

A testing SMTP server environment imitates the work of a real 3rd party web server. In the following examples, we’ll use Mailtrap Email Testing, which allows devs to capture SMTP traffic from staging and inspect and debug emails before they go out to actual recipients.

On top of that, the Email Testing can help validate your HTML/CSS, analyze the email’s content, and give a relevant spam score. The tool is easy to set up; all you need is to copy the credentials generated by the app and paste them into your code.

Here is how it looks in practice:

Mailtrap makes things even easier. Go to the Integrations section in the SMTP settings tab and get the ready-to-use template of the simple text message with your Mailtrap credentials. The most basic option for instructing your Python code on who sends what to who is the sendmail() instance method:

The code snippet looks pretty straightforward, right? Let’s take a closer look at it and add some error handling (see the #explanations in between). To catch errors, we use the “try” and “except” blocks. Refer to the documentation for the list of exceptions here.

Once you get the Sent result in Shell, you should see your message in your Mailtrap inbox:

If you prefer working in the local environment, the local SMTP debugging server might be an option. For this purpose, Python offers an smtpd module. It has a DebuggingServer feature, which will discard messages you are sending out and will print them to stdout. It is compatible with all operations systems.

Set your SMTP server to localhost:1025

It will help you verify whether your code is working and point out the possible problems if there are any. However, it won’t allow you to check how your HTML email template is rendered.

Next steps with emails in Python

We have demonstrated just basic options of sending emails with Python to describe the logic and a range of its capabilities. We recommend reviewing the Python documentation and experimenting with your own code to get great results!

There are a bunch of various Python frameworks and libraries which make creating apps more elegant and dedicated. In particular, some of them can help improve your experience with building email sending functionality:

The most popular frameworks are:

Good luck, and don’t forget to stay on the safe side when sending your emails!